Blue cremes and one Jelly

More blues you guessed it.

I did several post on "blues" two weeks ago and almost forgot about them
O.P.I.  "Dating a royal" (jelly) 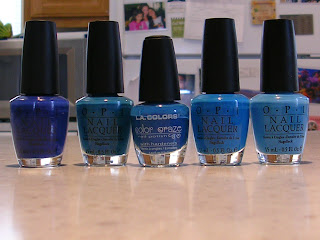 I could have done 2 coats of each, but "Dating a royal" was thin and definitely needed a third coat, so they all got third coats.
These nails are painted in the order of the bottle pics above, thumb to pinkie. 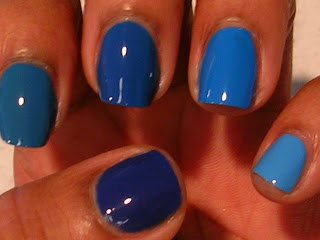 This pic is are more color accurate. But still a little darker, just a tad :)
They are all so different, I have to hand it to O.P.I., they may not have much quality control when it comes to "My Private Jet", but when it comes to variety they got it right. 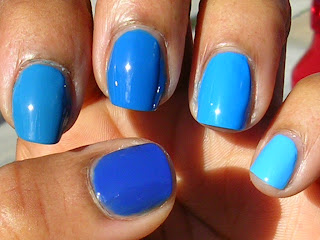 Even though "Dating a Royal" was thin (I'll give it another shot later) I really liked it ans all the OPI cremes...but then again they are blue and I LOVE me some blues ya'll! 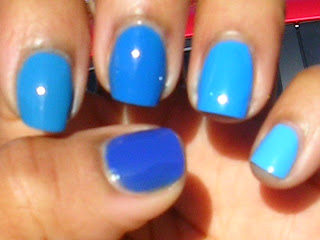 I think this blurry pics shows the richness in each color better, without distracting you with details :)
I was most surprised with "Static Electricity", even though the name does not suit it, it held its own against the big brothers of O.P.I.
Which one do you like most?

Suzi says feng shui is my most fave nail polish ever. :)

i was also surprised when i tried those LA colors polishes! both static electrity and atomic (the only two i have swatched so far) have fab formulas. I went back and bought a ton more so hopefully they all have that great formula!

I do like a royal blue. I think Royal and Static are the best.

@theallamenta- Suzi is a great color, definitely in my OPI Top Ten.

@jbrobeck- I agree, they have a great formula, I still have more to swatch :)

@jajen-I'm definitely giving "Dating a Royal" one more chance, the formula was surprisingly thin for OPI?! :)

All look great on you! I love me some blue polish and you have a great selection! Found some of those L.A colors, can't wait to try them. I'm really loving opi dating a royal because it's a jelly :)

I like "No room for the Blues" which has been my favorite for a while. (I have never tried OPI nail polish, though :o( )

@rmcandlelight- you are right about dating a royal, I need to change my title, Thanks :)

@Binara- No room for the blues, is one I have yet to wear as a mani, I need to wear it next :)

Susi says feng shui is still an untried for me, i must find the time to use it, your pics are making it look fabulous!

Hmm...I may have to pick up Dating a Royal. I looked at it the other day and passed because of all the other blues I have, but it's quite different.

Great comparison! I love them all :D

You can't go wrong with blues, the perfect nail polish colour. And Dating A Royal is my favourite polish ever!

Thanks ladies, I love comparison posts.

@Alisa- It was your site where I saw "Dating a royal" and went out a bought it, Thanks :)

Yes, comparison posts are my fav.
And since each of these blues are so different, I like them all. I'm going to go with Static Electricity as my fav. And I'm against the grain with Dating as my least favorite. It doesn't seem to be as shiny as the others.

Yaay! I'm happy because I don't have any of the OPIs, but I do have the La Colors. It looks great!

The LA Colors is the real surprise to me, It has such a great formula and really is a great deal for $1.

I need to grab some of the "non blue" colors :)