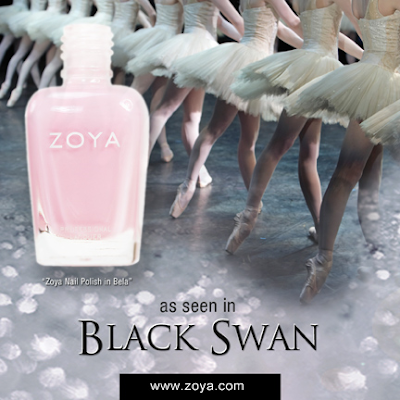 Funny how life works out sometimes...
Growing up in the Soviet Union, a little girl named Zoya dreamed of being a ballerina and dancing to Tchaikovsky's Swan Lake. Now, many years later, after a life immersed in music as a classical pianist and becoming a star in world of cosmetics, dreams have come true.
Enter the recent theatrical release of Black Swan. Early on in the film as the lead dancer, Nina (portrayed by Natalie Portman), prepares in her dressing room for a gala where she will be revealed to the masses as the new Swan Queen, a solitary elegant bottle of  nail polish briefly takes over the screen. This is where the line between a little girls fantasy and reality blissfully blurs. The bottle shown is Zoya Nail Polish in a delicate shade of pink named Bela.
Zoya Reyzis (founder of Zoya Nail Polish) and the Swan Queen of Swan Lake together at last.
Zoya Nail Polish can be found worldwide at quality salons and spas or online...
http://www.zoya.com
Available in Bela and over 300 other long-wearing, beautiful colors, the healthy formula of Zoya Nail Polish is completely free of formaldehyde, toluene, dibutyl phthalate (DBP) and camphor.
Zoya is the new color of fashion!

I'm really starting to like pinks! One of my free polishes I ordered "GiGi" very pretty pink/silver shimmer :)

Hey I gave you the Stylish Blogger Award! Check it out here: http://collegestudentsnails.blogspot.com/2011/01/stylish-blogger-award.html

@rmcandlelight- I'm getting back into it too, I'll ahve to take a 2nd lok at Gigi

@Antoszewskia- Thank You! I'll check it out now :)