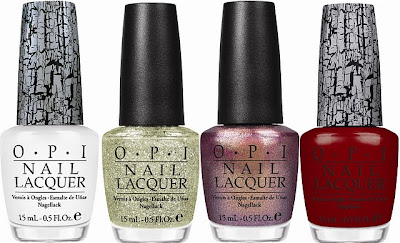 “We are very excited to continue working with tennis superstar Serena Williams to launch the next Glam Slam! shades,” said Suzi Weiss-Fischmann, OPI Executive VP & Artistic Director. “France is a country with a rich history in fashion and setting trends. These four new color options are ideal for showcasing your own personal style, à la Serena, whether worn alone or overlaid with Shatter for instant nail art.”
“Whether I’m on or off the court, style is important,” explains Serena Williams. “In addition to watching the runways for the latest trends, I think it’s important to add my own unique elements. With the new White and Red Shatter, I can customize my nails for a high-fashion take on the classically elegant silver and sunset shades in the Glam Slam! France collection.”
Serena Williams has received the World Number One in singles ranking by the Women’s Tennis Association on five separate occasions, along with being listed as sixth on the all-time greatest champions list.  Additionally, she has won two Olympic gold medals in women’s doubles and has earned 27 Grand Slam titles to date. Serena is the most recent player to have held all four Grand Slam singles titles simultaneously and only the fifth woman in history to do so.
New shades in the Glam Slam! collection will be introduced to coincide with each of the four major tournaments, beginning with the Australian Open in January 2011, followed by launches in May 2011 for the French Open, June 2011 for Wimbledon and August 2011 for the US Open. As with all OPI Nail Lacquers, the Glam Slam! collection contains no DBP, Toluene, or Formaldehyde, and each includes OPI’s exclusive ProWide™ Brush for the ultimate in application.
Glam Slam! France will be available beginning May 2011 at Professional Salons, including Beauty Brands, Beauty First, Chatters, Dillard’s, JCPenney, Pure Beauty, Regis, Trade Secret, and ULTA, for $14.95 ($20.95 CAN) suggested retail for each duo-pack.
For more information, please call 800-341-9999 or visit www.opi.com. Follow OPI on Twitter @OPI_PRODUCTS and become a Facebook fan!

Rally Pretty Pink is HOT!!!! What do you think of this release?

I definitely want those shatters. And Rally Pretty Pink.

I want all of that! LOL